I’m often reminded that we can’t manufacture faith by squinting hard and trying hard. Faith rises in your heart when you focus on the object of faith – Jesus.

In the woman’s story below, along with that of several others whose faith has been exemplified – how did they get to know him, and what made Him so approachable? Generally, these are characteristics uncommon to powerful or “religious” figures.

Here’s a part of her story:

“She had heard the reports about Jesus and came up behind him in the crowd and touched his garment. For she said, “If I touch even his garments, I will be made well.” And immediately the flow of blood dried up, and she felt in her body that she was healed of her disease.”

So what gave her the confidence and audacity? She had heard about him. I mean He is like none other! Then she must have pictured him and then thought to herself and then said…

I mean by the time she did see Him, it was real and just as she had imagined!

‘Sounds like that popular verse “Now faith is the reality of what is hoped for, the proof of what is not seen” (Hebrews 11:1).

Listen my friend – hearing creates imagination and thinking that leads to convicted words then attitude and action (belief) because “Faith comes by hearing, and hearing by The Word of God” (Romans 10:17).

And since Jesus is The Living Word, you focus on Him by practicing everything that’ll cause you to hear about Him and hear Him (reading, listening, meditating on the Bible and teaching resources that point to Jesus).

Beloved, may every aspect of His magnificent, approachable, powerful, personal, loving and favorable countenance be revealed in your heart today as you experience the truth in this:

What you behold, you become.

We all, with unveiled faces, are looking as in a mirror at the glory of the Lord and are being transformed into the same image from glory to glory; this is from the Lord who is the Spirit 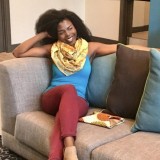